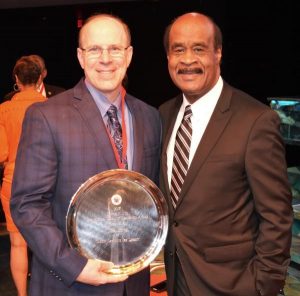 The Nix Award is “the County’s equivalent of the Presidential Medal of Freedom.” It is presented by the County Executive each year “to honor an individual or individuals who over the course of their distinguished lives of community service have made extraordinary contributions to the quality of our community at the very highest levels of excellence.”

The award was presented at the annual Montgomery Serves Awards at Imagination Stage in Bethesda, Maryland, where Dr. Bergel received praise for his commitment to those living in poverty. In his acceptance speech, Dr. Bergel expressed his gratitude for the honor, but stressed that there is still much more work to be done.

“We have to stop [poverty] now – each of us. What is acceptable for your kids and your parents? That is a good question to ask as we leave from here tonight.” – Dr. Mark Bergel

The prestigious Roscoe R. Nix Distinguished Community Leadership Award “was established by County Executive Ike Leggett in 2012 to honor community icon Roscoe Nix, who gave half century of service to Montgomery County. The Nix Award is the county’s equivalent of the Presidential Medal of Freedom, the local version of the nation’s highest civilian award.”

Dr. Bergel founded A Wider Circle in 2001 and has emerged as a leader in the movement to end poverty. He is a nationally acclaimed speaker in the fields of poverty, health, and social connection and has been featured on national television and radio programs. Dr. Bergel earned a B.A. from Northwestern University and went on to receive both Masters and Doctoral degrees from American University. Since its founding, A Wider Circle has served 185,000 children and adults with basic need items, workforce development, and long-term wraparound support.